Skip to content
Noramco Is Dedicated To Serving You During CoVid19 Pandemic. Learn More

Thursday July 12th, 2018 – On Thursday June 28th customers came from near and far to experience the 4th annual Noramco Carnival. The Carnival featured some of the biggest manufacturers in the industry, tons of great food and two special unveilings.

This year the Carnival had many of our vendor partners present to showcase their latest product offerings. A special thank you to Southwire, Sales Outsource Solutions, Prysmian Group, OFS, Lapp Group, Ilsco of Canada, Shawcor, Belden, Superior Essex, Eaton, NSPEC, Multilink, Panduit, Jameson, Rhino and Nexans for their support.

We enjoyed food from three delicious food trucks; Gourmet Gringos, Eva’s Original Chimneys and Johnny Rocco’s Pizza Wagon. They offered tacos, ice cream and wood fired pizza respectively. One source even went as far as to say it was “the best food at an event [he had] ever had”. Another unique feature of the Carnival was the games, attendees were able to test their strength on the high striker and see who had the fastest reflexes on the light strike board.

This year the Carnival featured something extra special, a grand unveiling! But what is better than one unveiling? Two! The first unveiling was brought to us by Nexans. They unveiled their latest product which is Electric Vehicle Charging Stations. These charging stations are geared towards large commercial projects like shopping malls, condominiums and parking structures. The second unveiling was made by Noramco itself, we unveiled a new mascot to compliment the Noramco Infrastructure brand. The mascot named Norman; who hails from Mars and is in love with all things green is committed to making the jobsite safer with high quality infrastructure equipment.

We would like to thank all of the people that made it out to the event and enjoyed everything the Carnival had to offer. If you did not get a chance to attend the event; do not fear as the 5th annual Carnival will be just as impressive! 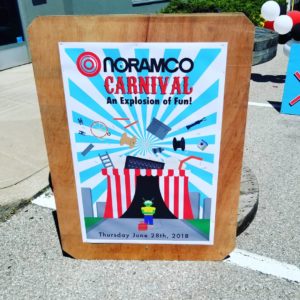 RELATED: Noramco adds out of this world spokesperson

About the Author: Amanda Newman